It’s DROC’s turn again to organise the annual Club Relays, and we’ve selected a venue that will offer fast running and great spectating, without having to drive too far. The arena has parking, toilets, picnic areas and playgrounds. There’s no excuse for not being part of the action! Ian Dodd is planning exciting courses which will be a lot of fun for everyone.

There are 5 courses to choose from. Course 1 is the longest, and will be approx 7 kms. Course 2 will be about 5 kms long, and Course 3 will be around 3 kms, with Moderate standard navigation. Course 4 is Easy standard. Course 5 is a combination, with 1 Hard, 1 Moderate and 1 Easy leg. Each team requires three competitors.

The Relays are a fantastic day out as we all get together and barrack loudly for our clubmates! To enter, just let Debbie know which course you would like to compete on.

DROC salutes the mighty efforts of rogainers extraordinaire Vic Sedunary and Merv Trease, who won the Mens Ultravets category at the World Rogaining Championships in Alice Springs!  The boys put in a lot of long hours training, and their efforts certainly paid off.  Vic says that out of 24 hours, they only had one “inefficient” hour.  You can read all about the event in the September issue of Punchline.

Sarah Davies has been selected to represent Victoria at the Australian Schools Orienteering Championships in Queensland in late September.  Sarah will be part of the Junior Girls team, and we wish her all the best as she competes in the Sprint, Long Distance, and Relay competitions.

Relays – It’s All Over

Our girls finished a fantastic JWOC week in the Relays.  Lanita led off for the AUS 1 team, and Asha was first leg for the AUS 2 team, so they started together.  They stayed together right through the first loop, hitting the spectator control 1 second apart.  Lani pulled away on the short final loop, to finish in 32nd – her run was the best of all the Aussie girls.  Asha was not far behind in 37th.

Both girls have a lot to be proud of.  Lanita, in her last JWOC, had the best girl’s Sprint result for some years by finishing in the top 30; she came oh so close to making the A final in the middle, and she finished up with a great Relay run.  Asha was very consistent all week, and has had a great experience with the promise of more JWOCs to come.

After an excellent run in the Middle Distance qualifier, Lanita was very unlucky to miss the “A” final – the top 20 go through, and she finished 25th.  Asha also ran consistently to finish 35th.  The terrain was steep and complex, and every second counted.   In the B final, both girls had small errors, and finished within one second of each other!  Lanita was 42nd and Asha was 43rd.

Asha and Lanita both completed the JWOC Long distance race, at an altitude of over 2000 meters, and with more contours than you can count (check out the maps on the JWOC website).  Lanita was 82nd and Asha was 89th, both girls had clean runs and were happy with their results.

The Middle Distance qualifiers are on next (Wed), followed by the Final (Thurs), then the Relay (Fri).  Follow the team’s progress live at the JWOC website and check their posts and photos at the OA Facebook page.

The Orienteering Victoria website brings you a detailed daily update.

Lanita’s strong sprint form this year continued at JWOC, where she blitzed the second half of the race to climb from 71st at the first radio check, to 26th overall – her best ever result at JWOC!  Lanita and Asha both wore GPS trackers, and it was fascinating to follow their progress in real time on the JWOC website.  Asha had a variable run, doing well in the first half but making a couple of small errors near the end in the complicated arena section with its myriad of fences. 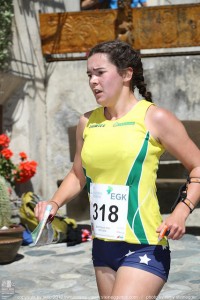 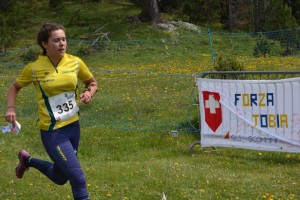 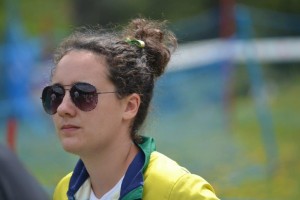 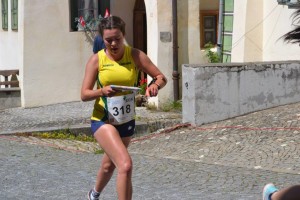 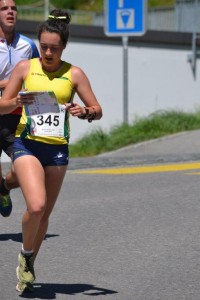 JWOC swings into action this week, starting with the Sprint on July 10.  Our girls have been training in the stunning Swiss mountains – check out the photos – warning, you will be jealous of all that sunshine and scenery! 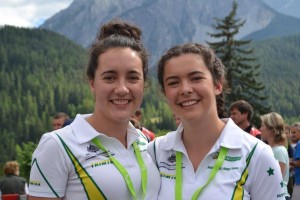 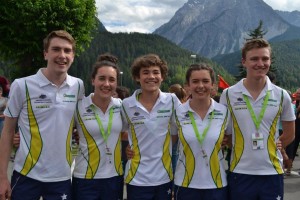 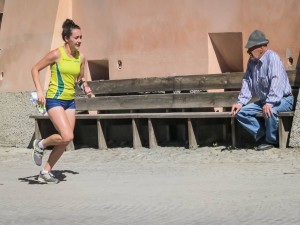 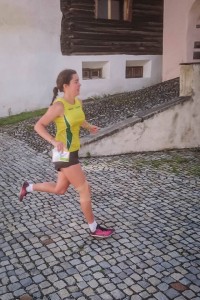 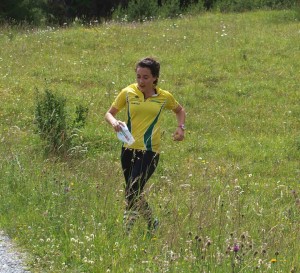 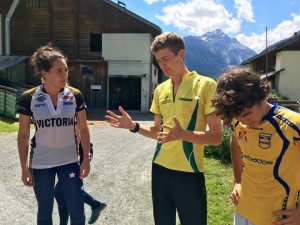 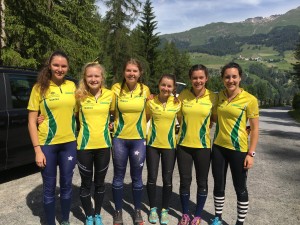 DROC members were out in force at EndurO 2, which saw the debut of the new “true or false” format, and the introduction of a 90 minute course.  Both proved popular with competitors – the extended time opened up a lot more route choice options, and answering the questions was quicker (though care was still needed thanks to the devious minds of Ilze and Tina).  Bemused voters saw us running through a couple of polling places, in search of answers that had nothing to do with politics!

The map was a compilation of the very hilly Koolunga map to the east, and the flatter-in-some-places-but-not-so-flat-in-others Wattle View, to the west.  Route choice was not at all obvious, so smart thinking was as important as speed and endurance.

DROC members took out three of the four categories.  Victory on the 120 min Run went to Andrew, who cleaned up the entire course in 23 kms and a little under 2 hours.  Ian won the 90 min Run by a whisker, scoring 720 points; Colin was third with 690.  The 90 min Walk was the most popular category, and proved very competitive.  Tony did the honours, scoring 530 points, with Helen second on 500.

Our second long distance EndurO is on Saturday July 2, using a combination of maps covering Boronia and Ferntree Gully (yes there will be some hills … but also some lovely sections along creeks and bike trails).  This is a Score event with 40 controls – visit as many as you can to score as many points as possible.  There are four courses – 120 min Run, 120 min Walk, 90 min Run, and 90 min Walk.  PLEASE NOTE CHANGES TO THE PREVIOUSLY ADVERTISED 75 MIN COURSES.

We provide: Maps, control cards, pens/pencils, plastic bags
Please bring a watch, and water.  There are toilets at the Start and out on the course.
Registration opens at 1.30pm.  There will be an important Briefing and map handout 5 mins prior to each Start time.
Cost: $5 adults, $2 juniors.  No charge for Saturday season ticket holders.

NEW QUESTION FORMAT!  Instead of choosing from 3 answers to a question, there will be a statement, with an answer of either YES or NO; eg “The letterbox at no 28 is made of wood”.  If the letterbox is made of wood, answer Y.  If it is made of something else, answer N.  We expect this will lead to less time spent at the controls, and more time to score points!

DROC put on a show at Yellow Gum Park for our special MelbushO event.  We had upwards of 150 eager competitors who tested their navigational skills in the terrain which varied from steeply contoured riverside slopes, to gentle spurs and gullies, to complex mounds and pits – a little bit of everything.

Our fundraising efforts were hugely successful – we sold 150 jars of jam, and did extremely well with the raffle.  Not only will our own juniors, Lanita, Asha, and Sarah, be assisted with their travel expenses for JWOC and Aus Champs, but we’ll be able to make a donation to the Victorian Junior Squad.  Thanks to everyone who helped out today and made the day another success story.

Check the GALLERY for photos.

Lanita and Asha are off to JWOC!  The Australian team to contest the Junior World Orienteering Championships was announced, and the dynamic duo are part of the 12-member squad.  JWOC will be held from July 9-16, in the Engadine region of Switzerland.

It will be Lanita’s final JWOC and she has been training hard, proving her fitness and skill by winning the Australian UltraLong in South Australia, by 4 minutes.  Asha joins her sister for the second time, coming off some excellent results in the Australian Easter 3-Day carnival. 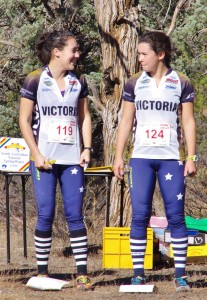 Before flying off to Europe, both girls will compete in New Zealand next month, in the Aus-NZ Test match, representing the Australian Bushrangers.

Our next MelbushO on Sunday June 19 at Plenty Gorge Park, will be a major fundraiser to support our Juniors.  We’ll be selling jams and relishes, and holding a raffle with a fantastic prize of a $120 voucher from Rebel Sport.  The next issue of Punchline will have a special feature on all our up and coming junior orienteers.

Congrats Asha and Lani, we wish you every success!

DROC members enjoyed bush events in two States – while some headed to the Flinders Ranges for the South Australian Championships, others stayed closer to home at Balt Camp, a short drive north of Melbourne.  Great results were achieved in both locations.

In the SA Middle Distance Champs, Janine placed 4th, Peter D came 5th, and Simon was 6th in M21E, a very impressive result in a National event.  The Ultralong next day saw Lanita claim victory by 4 minutes in the final JWOC selection race.  Janine gained a podium finish with 3rd, Peter D maintained consistency with another 5th, and Pete and Ilze finished first and second respectively in the Enter on Day categories.  While we now wait for the all important JWOC team announcement, both Lanita and Asha are in the Junior Bushrangers team to represent Australia in New Zealand.

Meanwhile closer to home, we enjoyed superb weather and terrain that proved more of a challenge than expected, at Balt Camp.  Despite most of us admitting to multiple errors, we had some good results with Debbie winning Course 6, Denise second on Course 3, Arika and Luca were third and fourth on Course 8, and Sarah, Peter H and Peter G were 5th on their courses.  Andras, Ian, and Leo were all in the top half on Course 1 or 2 so all around not a bad day!

DROC members were out in force on a beautiful Autumn Sunday at Westerfolds Park, for the first MelBushO event of 2016.  It was great to see such a strong contingent which included a number of our younger, and newer orienteers.  Everyone had a great time, and we saw some top performances, particularly from Prez Pete who won A course in a sizzling 34 minutes; and Eric Louw who was second on C course in a speedy 26 minutes.  Others to impress were Ian Dodd, Andras Bogdanovits, Ian Davies and James Love, who were all inside the top 10 on their courses.

Check out the Gallery for photos from the event.

The next MelBushO is on Sunday April 17 at Cardinia Reservoir, and it’s DROC’s turn to host.  Courses have been set by Pam King.  MelBushO events are a perfect introduction for newcomers who would like to learn bush orienteering, in locations close to Melbourne.  They are ideal for families looking for an outdoor activity they can do together, and for experienced navigators wanting to keep fit and hone their skills.

There is no need to pre-enter; simply register and pay on the day.  You can choose any of four courses – Long Hard, Short Hard, Moderate, or Easy.  Start any time from 10am until 12 noon.  Please remember that courses close at 1pm, so make sure you arrive with plenty of time to complete your course by that time.

Sportident electronic timing will be used – if you have your own SI stick, bring it to Registration for touch screen entry.  If not, you can borrow one at Rego.  Coaching, equipment loan and refreshments are all included in your entry fee of $10 for adults and $5 for juniors.