The Bush orienteering season is imminent, with the traditional season opener, the Bendigo To-Day, on this weekend.  Next weekend the Victorian Schools team, including our own highly talented juniors, is organising the first of the new Vic Autumn Series events, at Bunjil, south of Ballan.  This is a major fundraiser for the team, so give them your support by going along to the event.  Online entries close next Friday – read all about this great event here: https://www.vicorienteering.asn.au/support-the-vic-schools-team/

This is also the first event in the new Vic Autumn Series, comprising 6 events between February and June.  The series is a revamp of the former State Series/Vic Bush Series, but with some big changes.  Most notably, there are five courses to choose from, of varying length and difficulty, at each event – exactly the same as Bendigo Bush and MelbushO events.  Choose your own start time between 10am and 12 noon.  All events will be $20 to enter for adults, and $12 for juniors, so no unwelcome surprises.  Online entries for each event will remain open up until Friday at 8pm, giving you more time to get your entry in. You can also enter on the day.  And I hear there are some other new features to come, all in response to feedback by participants received over summer.

There are generous series prizes, random prizes for those who pre-enter online, and a prize for the fastest finish chute split on each course (donated by DROC) which is sure to provide excitement for spectators! There is also an inter-club competition, so we need to get DROC members out there!  Read more about the Vic Autumn Series here: https://www.vicorienteering.asn.au/orienteering-carn/vic-autumn-series-2019/

If you would like to car pool, borrow a compass or SI stick, get some coaching, or just meet up with other club members, contact me beforehand and we’ll help out.  Look out for the DROC tent and flag close to Registration; an ideal place to leave your gear while you are on your course, then compare notes, celebrate or commiserate over lunch afterwards!

Record has is that DROC held its first orienteering event on Thursday 25 January 1979 at Carinya Cutting, which Mark Phillips advises was named after a railway line cutting near Mount Evelyn, associated with the old Warburton line. Apparently a steep cutting; similar to the one many of us ran through at Deepdene a few weeks ago. To everyone’s surprise, Barry Giles kept a copy of the results from all those years ago. There were 31 starters, including three Keys and several other familiar names (see results list). Results from a follow-up DROC event at Carinya Cutting on 28 February 1979 are also attached.

Fast forward 20 years, and Prez Pete was tasked with setting a scatter-o course at Blind Creek for DROC’s 20th anniversary. Unfortunately the map could not be located, but the event had a twist in that control 20 was not marked on the map. The only way to locate it was to solve a riddle that went something like this: “The control you seek tonight may make you dizzy because of its height. Look at the map, the half that is west, run up the hill and you’ve passed the test.”  The control was located on a relatively obvious high point and I recall that many competitors successfully located it.

Fast-forward another 20 years; and record will have it that on Monday 28 January 2019 no fewer than 44 DROC members and 108 starters assembled at the base of the Dandenongs to take part in street-o on the Koolunga map. During the briefing, Debbie Dodd MC’d a quick fashion parade of retro orienteering tops that everyone had been encouraged to wear. Some colourful DROC cotton tee-shirt tops from the early and mid 1980s were on display, followed by some of the DROC cotton tops from the 1990s including one which featured a back-to-front DROC logo. All DROC tops from the modern era were paraded including the “dentist’s collar” version and its sequel without the collar, plus the two current designs that many of us now wear.

Carl Stemp set a challenging course with clusters of controls separated by big gaps and a railway line, just like in 1979 at Carinya Cutting. Some may recall that the Koolunga map used to be called Swagman’s Gully in honour of the once famous Swagman restaurant, which mysteriously burnt down in 1991. The site on Burwood Highway now accommodates an Aldi supermarket. Perhaps Carl’s placement of control 13 – directly beside the old Swagman site – was a subtle nod to the map’s history.

Despite not being a Saturday, a large 40th birthday cake was devoured by everyone after the event with many people staying on chatting, reminiscing and taking advantage of the public holiday evening. An old photo of Phil Torode and Ian Greenwood surfaced from somewhere; Mark Phillips recalled the old days when a number of DROC members’ houses backed onto the old railway line in the Mount Evelyn area; stories of how the Keys started the club were re-told; predictions that James Love will become next DROC president were made; a group photo was taken; newer DROC members mixed with older ones and a very enjoyable evening was had by all.

Results from Carinya Cutting 1979 and photos from Koolunga 2019

Dandenong Ranges Orienteering Club was formed in December 1978, and held its first event in January 1979. This will be a year of celebration for the club, kicking off with a party and a Really Big Birthday Cake on Monday January 28, at our park-street orienteering event in Koolunga, Ferntree Gully.  We invite all members, old and new, to come along and mark the occasion.  Please wear your oldest DROC outfit, or something from the era, to make a fashion statement!

2019 will be not just a year to look back on, but a year to look forward to.  It will be a year of firsts – the club’s first Middle Distance Championship, to be held on the Queens Birthday weekend at Creswick; Australia’s first Indoor Sprint at Monash University on June 30, and Australia’s first City Race, in Melbourne on October 13, are just part of our plans for the year.

We will continue to focus on Park Street orienteering, and we’re looking forward to seeing DROC on the Park Street Champs podium once again, after the Final on February 28.  We’ll also continue to support our juniors, as they train and race hard, and vie for selection to State teams.  We’ll be out there at bush events and sprint events, flying the DROC flag.  We’ll be cheering each other on at the Relays.  So why not get yourself out there – life’s more fun with a map!

The Victorian Sprint Championships were held on the new, world class map of the School of Mines, which certainly lived up to the hype! Map and courses were universally hailed as a true reflection of Sprint orienteering at its best.  Most DROC members present were again on the podium:

Visit our Gallery for some top action photos!

DROC members have certainly been enjoying themselves at this year’s Sprint Into Spring series! After four races, several club members are in line to win the highly prized Jerseys. Helen has been flying up the hills on the Mo Women course, and holds the Polkadot Jersey. Wayne and Sarah are keeping it in the family as they also hold Polkadot Jerseys, as best hill climbers on the Sally Men and Sally Women course.  Amber has captured the Green Jersey as the best female sprinter on Sally Women, and Sammy also has her hands on a Green Jersey, for Usain Women.

Other noteworthy performances have come from Prez Pete with a dazzling 5th place in Race 4 on Mo Men, among the toughest of opposition. Helen has also been showing the pack a clean pair of heels with a second and third place on the Green Jersey legs, and is in the running for a podium finish at the end of the series. Ian scored a win and a third in the Sally Men, while Sarah L claimed a second place in Race 3 on Sally Women, and is in contention for an overall place in both Yellow and Green Jersey competitions. Amber had a breakthrough win in Race 3, while Sarah D placed in Races 1 and 4 (after planning courses for Race 2). Wayne, James and Eric have both featured in the top three on the Green Jersey leg and on the Polkadot Jersey leg on Sally Men, proving themselves versatile all rounders.  Sammy is poised to claim third overall on Usain Women.

There are three more races, with the Jerseys to be determined in Ballarat over two races on November 24.  This will be followed by the Victorian Sprint Champs on Sunday November 25, where we are sure DROC will achieve even more glory!

See our GALLERY for some great photos of DROC in action at Sprint Into Spring.

The indefatigable Stuart McWillam has won his second MEFTY award (Most Events for the Year) and will hold the coveted trophy for another 12 months.  We thought Stuart set the bar high last year – this time around, he completed an incredible 180 out of 186 events!  Even more remarkably, Stuart travels from Werribee, and has clocked up thousands of kms in his quest.  Recently he switched to train and bike travel, and shows no signs of stopping! 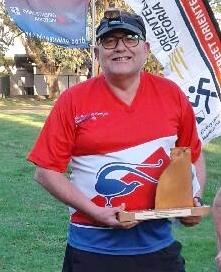 Yes it’s our favourite time of year – Sprint Into Spring!  Saturday October 20 sees the debut of Cornish College in Bangholme, for Race 2.  Although classed as a campus map, this school has much more to offer than just buildings.  It has a small central campus with lots of ramps and stairs; lakes, bridges and an island; a golf course; lots of trees and open ground; lots of fences; and lots of animals!  Be prepared to meet alpacas, chickens, and other assorted farmyard friends as you navigate through your course.  Click here for all the details.

Race 1 at Caulfield Grammar rewarded the competitors who slowed down a little and avoided errors.  28 DROC members turned out, and had some great results.  Asha Steer and Sarah Love have green jerseys for the winners of the Sprint leg on the Mo and Sally courses.  Asha was third on the Mo Womens course, while Peter Hobbs and Simon Rouse were in the top 15 on the huge Mo Mens course; Nick Maddock, Martin Steer and Ian Davies were all in the top half of a very competitive bunch.  James Love was 5th on Sally, while first time sprinter Andrew Perkins was 8th.  “That was the best fun I’ve ever had!” he said later.  Sarah Davies buried herself to take second on Sally, while Sarah Love was 6th, Amber Louw was 10th, and Debbie Dodd was 12th.  Sammy Love was 4th on the Usain course. 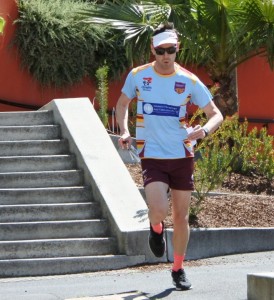 Another AusChamps has come and gone.  The carnival was held in Renmark and the Adelaide Hills, providing a very mixed bag of highly detailed erosion features, classic campus sprinting, pine forest, traditional spur/gully, and very technical rocks on the last day.  Some terrains and formats worked better than others, but all in all, it was a fun week that saw DROC produce some great results.

Prez Pete was “our man on the ground” and he has put together a great set of photos, covering our Victorian junior and senior reps (who looked very sharp indeed in their new tops, definitely winners in “fashions on the field”).  Our age-groupers also turned in some strong performances, with a Championship for Simon Rouse, and some personal bests. 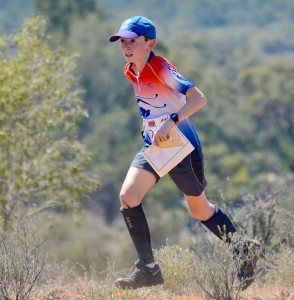 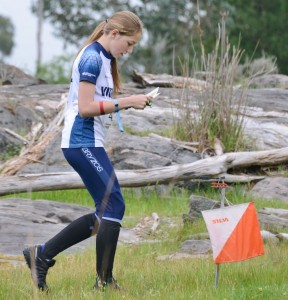 Debbie Dodd became the second Vintage member of The Millennium Club (2000 events since Jan 1 2000) on September 26 2018, at Clarinda.  Ray Howe presented Debbie with her participation profile, and a delicious piece of vintage cheese!    Current TMC Rankings