Orienteers of all ages are invited to a special Sprint training session at Eltham College on Sunday March 4, starting at 10.30am.  As featured in “Australian Orienteer” magazine (Dec 2017), Peter Hobbs will put you through your paces in a fun, interactive workout for your brain. You’ll practice map and symbol interpretation, visualisation and simplification, then follow an actual course on the screen as you play “Where would you go?”  After practising your new skills on a real course, you’ll be well and truly MSW-ready!Entry is FREE, but for map printing and catering purposes, please  enter online by February 28 or email us. 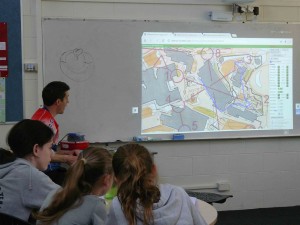 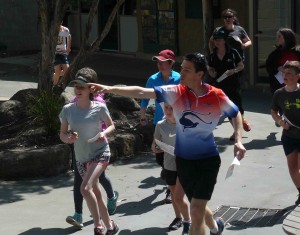 DROC is hosting the first of 2018’s Summer 75 MTBO events, at Mt Evelyn, on Saturday January 13.  Discover mountain bike orienteering on an evening bike ride. Explore the new map which will take you along the Aqueduct trail, and tracks and paths along Olinda Creek, on a course planned by Graham Wallis.

Riders have up to 75 minutes to visit as many controls on the supplied colour map as you can. You choose which ones to visit and which way to get there and back. Each control is worth 20 points. 10 points penalty per minute for returning late.Start times: 6:00 pm to 6:15 pmEntries: Enter on the day – register by 5.45pm.  Fees: Adults $12, Juniors $6.Map boards and Sportident e-sticks:  available for loan.

BBQ and Drinks: Stay and socialise after the event. Sausages, cheese toasties and soft drinks available.

The first Wednesday event for 2018 was a fitting time to hold the first event on the rechristened “Cavills Corner” map. For those querying the lack of an apostrophe, the map honours both Wally and daughter Sue – who was also a very keen orienteer, and who in fact dragged Wally along originally.

Wally’s other two daughters, Linda and Caroline, joined us for the event, as did 110 competitors, including some we havent seen for a while, and some new faces. We made a short speech and took some group photos, then as maps were handed out we quickly realised there was a shortage (thanks to the printers who misinterpreted instructions). In true Wally fashion, an on-the-fly solution was quickly found. People either photographed the map with their phones, or found a friend to share with, which made for a very convivial evening. There were lots of comments later about how much fun it was to “run with friends” – after all, that’s what the evening was all about. Wally would have loved it.

Oh, and next time you find yourself on the corner of Harold and Templeton Streets in Wantirna, find the second-from-the-right casuarina tree on the north side of the corner. Look up and see if you can spot a small silver plaque “Cavills Corner 2018”. Thanks Wally – you changed our lives for the better, and for that we will always remember you.

Visit our Gallery for photos from the event.

Orienteering Australia has announced its 2018 national squads, and we are delighted to announce that Lanita Steer is one of 7 women selected to the top tier High Performance Squad, while Asha Steer has been selected for the Junior Development Squad – two great achievements!

Lanita’s selection to the HP squad comes at the end of only her first year as a Senior, and means that she is under consideration for Australia’s top representative senior teams.  Asha will be eligible for selection to JWOC as well as other national junior teams.

DROC welcomes two new Life Members, following an announcement at the recent Christmas party.  Debbie and Ian Dodd each received the honour of becoming DROC members for life.  Ian and Debbie both thanked the club, with Ian relating the story of how close they came to joining another club:

“At the end of our first summer series, we were approached by Ian Greenwood and asked to join. Enticed by the offer of a “free feast at Christmas”, we said yes.  About two minutes later, John Sheahan asked us to join Bayside, but we had to tell him he was too late!”

Ian and Debbie both joined the committee after about 12 months, with Ian going on to become president, then treasurer, while Debbie took on the jobs of membership secretary, Punchline editor, and events coordinator.

“We’ve loved being DROC members” said Debbie. “This is such a great club to be part of”.

DROC hosted a great event at Monash University, on a completely refreshed map by Peter Dalwood.  Pete’s courses were a real test for the brain as well as the legs.  The organising team was led by Pam King – thanks to everyone who pitched in on the day and ensured a great competitor experience – even the rain stayed away during competition time.  Our thanks also to Kathy Liley as event advisor, and to Monash Uni for their permission to use the venue, and their assistance all the way through.  We look forward to returning in March for the Melbourne Sprint weekend – we only used half the new map, so there’s plenty more in store!

Congratulations also to our Sprint Into Spring Jersey Winners – Janine Steer won the Sally Pearson Womens Yellow Jersey, after a 6 week topsy turvy competition; and Lanita Steer claimed the Mo Farah Womens Green Jersey.  Lanita was also second in the Yellow Jersey competition, and third in the Polkadot Jersey.  Sarah Davies took home a matching trio of prizes after finishing third in the Yellow, Green and Polkadot jerseys on the Sally Pearson course.

Check the GALLERY for photos.  For all the results, jersey points etc from Sprint Into Spring and the Vic Champs, head to www.parkstreeto.com.au/sprint

DROC hosted the second Sprint Into Spring race on a brand new map at Oxley College in Chirnside Park.  Although small in size, the campus gave us plenty to think about with multiple levels and lots of corners and crevices, requiring constant map contact and directional changes.  With a mid-race map flip, and a hill climb to remember, we were well and truly kept on our toes.  The DROC crew, as always, handled a busy day with calm efficiency, ensuring everyone had a great time.

Check out the Photo Gallery to see DROC members in action at Oxley!

It was a great week up at Bathurst, and the DROC contingent certainly enjoyed themselves.  Highlights were a podium finish for Debbie Dodd in the Australian Middle Distance Champs, 4th place for Lanita Steer in the Australian Sprint Champs (her best elite result to date), representation in the Victorian Nuggets team by Lanita, Asha Steer and Peter Hobbs, and in the Victorian Schools team by Sarah Davies and Amber Louw.

Check all the photos in the Gallery. 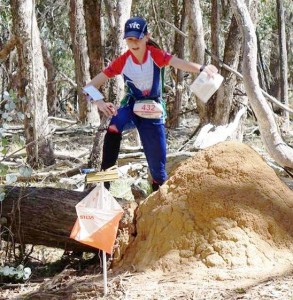 Sprint Into Spring 2017 is almost here, and we can’t wait!  Race 1 is at University of Melbourne on Saturday 14 October. Please note for this event only, start times are from 1.15-2.30pm – no starts allowed after this time due to another event at the venue. Registration will also open  earlier than usual, from 12.30pm.  Please note that no cars will be allowed onto the University campus – we recommend taking public transport.  There will be toilets, changing rooms and secure lockers available if you wish to change when you arrive.

Race 2 is on a brand new map at Oxley College in Chirnside Park, and it’s DROC’s turn to host.

All your favourite features will be back this year including the jersey competition, SportIdent electronic timing, live results, and high quality courses.

Series tickets offering six events for the price of five are also back, but only at the first two events. The cost is $50 for adults, $25 for juniors (under 21). Don’t miss out, and remember to purchase one at the first event.

Visit www.parkstreeto.com.au/sprint for all the event locations!

We enjoyed a great weekend of complex orienteering in the gold mining terrain of Creswick, venue for the 2015 Australian Champs.  Saturday was a very tough Middle Distance, starting with some relatively long and steep physical legs, before an intensely concentrated cluster of controls in a series of pits and erosion gullies amongst the old quartz diggings.  Sunday was less technical, but still featured plenty of traps, starting with erosion features, then into some subtle spur gully which caught people out, before finishing with more small watercourses and mining features to get the brain working as hard as the legs.

Congratulations to the DROC members who placed in one or both Championships:

Check the Gallery for photos.